Well, 2020 was a very strange year, wasn't it? It started off with large parts of Australia being on fire and had Trump nearly starting WWIII, then gave way to the COVID-19 pandemic. So many people have died from a disease, the likes of which this generation of the world's population has never experienced. Australia has been very lucky to not have had such high numbers of deaths as other countries, and I've been extremely grateful to have been a Perth dweller. Not only was our lockdown period shorter than other areas, we have been able to get back to semi-normal life relatively quickly too. While the coronavirus is still a threat, and still something that can cause lockdowns and possible deaths, it seems like we have reason to be a little more positive about life now.

Many of us looked to 2021 as the solution, the beacon of hope, the bringer of light and killer of plague. There is a feel of optimism, but along with it, caution.

I was not as cautious as I should have been on New Year's Eve.

At around 8pm, after a meal of homemade pizzas in front of an episode of US Wipeout with the family, I went into the kitchen to divvy up some of the leftover slices for our dog Zappa. I must have been a little blasé in my cutting, as the new Coles Master Chef utility knife I was wielding had cut two of my fingers on my left hand. I didn't even feel it. When I noticed the bleeding, I grabbed some Band-Aids to try and stop it. But it wouldn't stop.

Upon closer inspection, it became clear to me that this wasn't going to be fixed with just a Band-Aid. I had almost cut right through my middle finger, through the top third of my fingernail. My ring finger had a little chunk taken out of it as well. So, as my heart sank and my pulse raced, I called Rhona into the kitchen to help me.

I have no idea what would have gone through Rhona's mind as she walked in. There was blood everywhere. The decision was made fairly quickly to get me to the emergency department at Armadale hospital. Rhona and her dad Eddie whisked me up there, and after a brief interview with the triage nurse and desk clerk, I went through the doors and was guided to a chair.

As I sat there, with my fingers wrapped in hastily-placed Elastoplast and about six tea towels, I began to feel a bit miserable. I had ruined my family's plans for New Year's Eve. We'd made up a list of board games we were going to play as 2020 ticked to an end. It was going to be a lot of fun, and instead, my wife and father-in-law were spending the evening in the ED waiting room, while my kids and mother-in-law Pauline cleaned up the blood I'd shed in the kitchen at home. I didn't know how long I was going to be stuck in the hospital or what fate lay in store for my left hand. 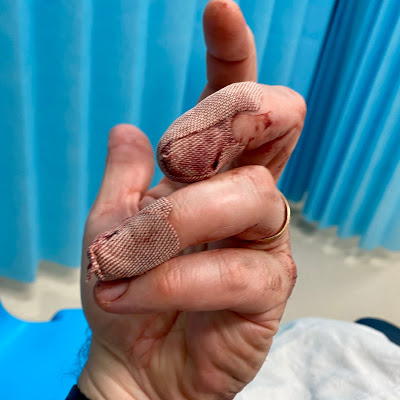 After about an hour had uneventfully passed, a nurse came in with my mobile phone, which Rhona had put in her bag when we left the house. She said that Rhona and her dad had been told to leave the waiting room due to a possibly contagious gastro-ridden patient. They were going to wait in the van. That meant that I was now able to text Rhona with my good hand, which was a wonderful relief. I think we were both very happy to be able to communicate with each other.

Twenty or so minutes later I was attended to by a doctor who proceeded to glue my finger together. She tried to pull off the part of my fingernail that had been severed, but there was a little piece still hanging on. And it was quite painful. While she was fixing me up, another doctor stuck his head in and suggested that I might need stitches. My heart sank again, as I thought I had avoided that bit! He he he...

While I grimaced, two sutures were stitched into either side of my finger, next to the nail. The first doctor asked me afterwards when I last had a tetanus injection. I said it had been less than ten years, hoping that would be long enough to get me out of having one. Yes, I'm a wuss, I know. Big phobia of needles, me. I later realised that it had actually been closer to fifteen years since my last booster. More on that later.

Anyway, I emerged from the ED around 11:20pm, and was swiftly driven home by Rhona and Eddie. We wished Pauline and Eddie a happy new year and they returned to their house, while Rhona and I managed a quick shower. We made it to the lounge room at 11:57pm to ring in 2021 with the kids! We watched the delayed telecast of the Sydney NYE fireworks and played board games for a little while before we all went to bed.

That was how 2020 ended for us. Things can only get better, right?