I'm still coming to terms with today's tragic news of the passing of David Bowie. I think it has affected a lot of people similarly. It's as if someone we always thought would be there was suddenly snatched away. Of course, he's as mortal as the rest of us, but there was always something otherworldly about him. I'm incredibly thankful that he has left behind such a massive body of work that will always be with us. His last album, ★ (pronounced as Blackstar) was released mere days before his death, on his 69th birthday. It was his twenty sixth studio album. Perhaps the fact that he'd put out two new albums in the last couple of years, after a decade of silence, had us all lulled into false confidence. I was convinced that he was going to tour again, but now I can assume that his last musical offerings were made by a man looking directly at his own mortality. 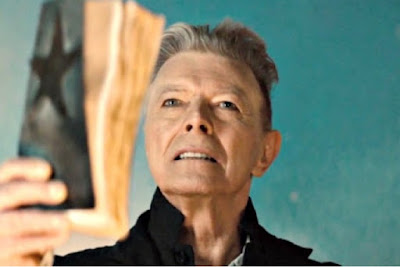 When you listen to ★, death is the common thread. It is mentioned in most of the songs, and is the underlying subject in some. The album can almost be seen as a goodbye note to all of his fans. I am amazed that what turned out to be his final record yet again defied genre. There was a little bit of everything in there, from wild jazz to Gregorian chants to lyrics using Nadsat. It is quite extraordinary for an artist to continually look forward and keep reinventing themselves, influencing others all the while. How many imitators did Ziggy inspire? How many acts delved into electronica after the Berlin trilogy? How many groups followed his trail into the New Romantic period? How many people wrote off his work with Tin Machine only to then listen to the aurally similar strains of grunge a few years later? Producer Tony Visconti told Rolling Stone magazine in a recent interview that he couldn't wait to see all the ★ copycat albums. There's no doubt that it will work through the ears of artists the world over now.

David Bowie's music is special to me for another reason as well. Rhona's favourite song of all time is Ziggy Stardust, and any time she comes along to one of my gigs (either solo or with WGJS) I have to play it. No ifs, no buts; it must be played. He he he...and that's fine by me. I was lucky enough to perform the entire Ziggy album with WGJS for The Newport Record Club's first season in 2014. That was such a fun gig; I got be Bowie and Mick Ronson at the same time! We were invited to do it again for the Rewind series in May 2015, and that was even more fun. Learning and performing that album only increased my admiration and awe of his immense talent, and I felt some sort of connection to him. 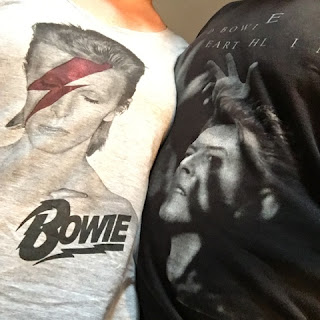 I was always aware of Bowie when I was growing up. Let's Dance was a huge album when it came out in 1983, and I was seven years old. Ashes To Ashes still found its way onto Countdown from time to time, and the image of Bowie dressed as that clown is one of my earliest memories of a music video. I remember absolutely loving his version of Dancing In The Streets with Mick Jagger. He he he...it's seen as somewhat daggy now, but I thought it was great. I'd not heard the original version at that time either.

It wasn't until I went to Bali with my family in 1991 that I developed a real interest in his music. Now, there were no streaming services or readily available downloads back then. If you wanted music, you either bought it, listened to the radio or taped songs from the radio. Cassettes were incredibly cheap in Bali at that time and I took the opportunity to listen to some albums that I'd never heard before. One of the tapes I bought was the Bowie compilation Changesbowie, an amalgamation of Changesonebowie and Changestwobowie, which was released in 1990. I remember the TV ad campaign for the album vividly as the camera scanned across the cover while the audio was made up of a second or two of all the songs on it.

The opening track was Space Oddity, and I remember loading the tape into my little Walkman knock-off and hearing that gorgeous fade-in for the first time. The song was like nothing else I'd ever heard before, with its eerie, doom-laden narrative and lush orchestrations. I was pretty taken with the whole album and I played it to death over the following months and years. As I journeyed through life, I picked up the odd album of his here and there, and proudly became a member of the Club Who Liked Bowie After 1983. I particularly dug 1992's Black Tie White Noise and his industrial rock album Earthling from 1997.

I didn't really start seriously delving into his back catalog until I received a copy of The Rise and Fall of Ziggy Stardust and the Spiders From Mars from a friend for my birthday one year. Shortly after that, Bowie announced a world tour. He would be in Australia in early 2004! I really liked his last two albums at that time, 2002's Heathen and 2003's Reality and I'd never seen him live before. Along with a small group of friends, Rhona and I decided to go over to Melbourne to see him. After we all bought our tickets, a Perth concert was announced! Ha! Our friend Kieran thought he would go to both anyway, because why not? He and I took it upon ourselves to try and buy all of Bowie's albums before the concert(s). We knew that he had hundreds of songs to draw from, and we wanted to be as familiar with as much of them as we could. On February 26th, 2004 we went to Rod Laver Arena and watched an absolutely fantastic show! I will remain forever grateful that I got the chance to see him live. You can check out the setlist here.

In July of that year, Bowie was treated for an acutely blocked artery while the tour was in Germany. Except for an appearance at a charity concert singing Changes with Alicia Keys in 2006, Bowie pretty much vanished from the public eye. It appeared that he had lost interest in music. Was he still ill? Had he retired for good? Was he working on other projects? Would he ever tour again?

I'll never forget when he released the single Where Are We Now? on his 66th birthday in 2013. It was a Bowie birthday miracle! Not only did we get the first offering of new Bowie material in a decade, there was the promise of a new album on the horizon too! I remember watching the typically strange video clip in wonder. Such a melancholy track, but amongst the sadness there seemed to be hope. The final lyrics of the song always get to me a little bit:

I can't explain why it makes me well up on occasion. The music seems to turn a little mournful and there sounds like he has a tremor or two in his vocal delivery. There was such a sense of optimistic finality to it, that in retrospect, the last three years of his life might now be seen as extra time. The score was tied, and he wasn't finished. We now know that he spent the last eighteen months living with cancer, but what caused Bowie to start making music again? After ten years what made him go back into the studio? To have Bowie releasing albums again seemed to be an essence back into life that had been missing.

I know some felt The Next Day was a little patchy but I thought it was the perfect link between where he left off and his best work of the late seventies. It was great to see him working with Tony Visconti again, and I became excited about what might follow. The album was fairly straightforward rock/pop, by Bowie standards, and I suspected that his next offering would change direction. I was right, but in true Bowie form, I had no idea where he was going. His next single, Sue (Or in a Season of Crime), was released in October 2014 ahead of his career spanning compilation Nothing Has Changed. It was a seven and a half minute murder ballad recorded with a jazz orchestra. Wow, what a curveball. The release of a new collection of Bowie's best and well-known tracks could now be seen as the foreshadowing of his final work.

Late last year, there was news of another new Bowie album coming. There was an epic single released with an accompanying video that nudged the ten minute mark. I held off watching it until the album was released on January 8th this year. I bought it that morning and was very excited by what he'd come up with. He'd won over many critics and most reviews were glowing. I greedily imagined what he would give us next. I thought of possible musical experimentations and even allowed myself to believe that he might tour again. It seems to defy logic that while Bowie's star was ascending once again, his light would extinguish forever only a couple of days later. I don't think I have ever shed so many tears over the death of someone I never met or knew. The news winded me with disbelief and immediate sorrow. I remember being very saddened by Robin Williams' death in August 2014, but not moved to cry for him. Kurt Cobain's suicide was a big shock, but I spent a lot of years being angry at him to really mourn his loss. Who knows what really happened there anyway? When we lost Freddie Mercury, it was kind of expected. We had all been informed that he was battling AIDS and had become quite ill and frail. I was too young to grasp the concept of what happened to John Lennon on December 8th, 1980. Four-year-old me knew who The Beatles were and who Lennon was. I have memories of asking my dad why he was dead and why the man shot him. He didn't know what to tell me. I always get an image of Neil Young's After The Gold Rush album cover when I think back to that time too, as I believe it was on top of our record player in the lounge room. But, to lose Bowie now, while he was still making such great music, it just doesn't make sense. To add to the weight of his death, shortly after the news was confirmed and it wasn't the hoax we all hoped it was, I received my new copy of Rolling Stone magazine. There was a small byline on the cover that read "The Return of David Bowie" and a review of ★ was also included. How's that for timing?

David Bowie had been making music for longer than I've been alive. He's always been there. I don't think a week goes by where I don't listen to a song of his. For that fact, one of my typical gig weeks is rarely Bowie-less as well. I'm thankful that I truly appreciated his music while he was still with us, and will treasure memories of rushing out to buy the new Bowie album. I bought The Next Day, Nothing Has Changed and ★ on the day they were released. I still can't believe that I'll never experience that moment again, and that the last time I did was only a few days ago. I didn't realise that he was saying goodbye.

Email ThisBlogThis!Share to TwitterShare to FacebookShare to Pinterest
Labels: ★, Blackstar, Bowie, David Bowie, The Next Day, Where Are We Now?